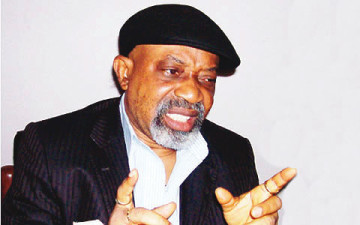 TVC E, POLITICS – The Independent National Electoral Commission (INEC) is insisting that the minister of Labour and Employment, Chris Ngige has not withdrawn from the Anambra central senatorial race re-run.

Dr. Ngige was the candidate of the All Progressive Congress (APC) in the March 2015 election.

He was appointed minister by President Muhammadu Buhari following the victory of the party in last year’s polls.

The new Resident Electoral Commissioner (REC) of the commission, Dr. Lawrence Azubike, said at a meeting in Awka with political parties and stakeholders in the state that the commission was “not aware that anybody has withdrawn” from the rerun.

The state secretary of the APC Chukwuma Agupugo, had drawn the commission’s attention to a letter from Ngige about his withdrawal from the rerun.

Azubuike promised to verify the truth about the matter as he has just assumed duties in the state.

He said: “we have not received any statement to that effect. This election is a re-run not a bye- election.

“What the election means is essentially going back to March 28, 2015. INEC will use that same method in conducting the election and we are going to await further directive from the commission’s headquarters in Abuja.

“The political parties and the candidates for the re-run election are not in doubt. Only the candidates and parties who participated in that election will participate now, excluding the Peoples Democratic Party (PDP) because of the court judgment.”