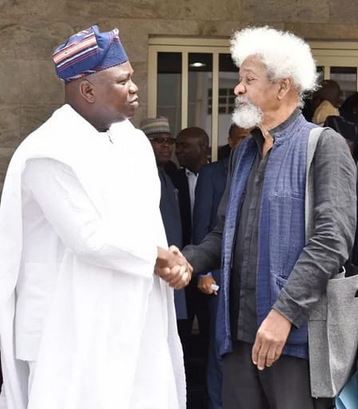 TVC E. Ahead of Lagos at 50, the Lagos State Governor Akinwunmi Ambode today appointed Wole Soyinka and Mr. Rasheed Gbadamosi as Co-Chairmen of the Planning Committee.

While inaugurating the Committee at the Lagos House Ikeja, Governor Ambode expressed confidence in their ability to deliver a world-class celebration, that it will afford the state the opportunity to showcase to the world its immense potentials for future growth and development.

“Lagos State will be 50 years next year. 50 years is a significant landmark in the life of any individual, institution or State. For Lagos State, it has been an eventful 50 years which deserves to be fittingly celebrated,” he said.

Ambode also said Lagos, despite being the smallest and oldest state in Nigeria, remains the only state that has not been divided to create more states since its inception on May 27, 1967.

He said, Lagos has maintained its status as the commercial capital of Nigeria and the most cosmopolitan State in the country where peoples of every tribe, race and creed reside peacefully with an excellent record of religious tolerance.

“Lagos is a land of opportunities, offering all residents the chance to succeed in their vocations and endeavors. Lagos provides jobs to more people than any other State in Sub Saharan Africa. Lagos is that place where you have a chance to make it if you work hard,” he said.

Professor Soyinka said the celebration of Lagos at 50 would afford an excellent opportunity for the state to identify with the triumph, losses and experience of the Black Race at home and in the diaspora. He pledged that members of the Committee would work assiduously to ensure that Lagos gets the deserved and most befitting celebration.

I wish I could walk again – Yinka Ayefele