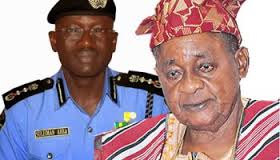 TVC E. Some concerned indigenes of Oyo town in Oyo State have filed a fresh petition to President Muhammadu Buhari urging him to compel the Police to carry out investigation on the Alaafin of Oyo, Oba Lamidi Adeyemi III.

The petition, signed by the duo of Jacob Oluokun and Suleiman Ishola on behalf of indigenes of Oyo town, was made available to newsmen in Ibadan, the Oyo State capital, on Monday.

The petition was received at the State House, Abuja on Friday. The allegations includes: Unprecedented criminality, flagrant human rights violations, bomb planting, gun running and unresolved assassinations in Oyo town, Oyo State.
This brings to three the number of petitions sent to the State House, Abuja in the last one year.
A similar petition was sent on January 26 and another one to former President Goodluck Jonathan in 2015.
In the fresh petition, the petitioners listed other alleged complicity of Oba Adeyemi in criminal activities in the town.

The petitioners expressed worries that many months after the court gave its order to investigate the Alaafin, the Nigerian Police are yet to comply.
“But because we believe the new government of Buhari will not be party to injustic

e, we petitioned the Presidency,” counsel to the petitioners, Abiodun Abdur-Raheem, said.
A Federal High Court Sitting in Ibadan had on December 15, 2014 issued an order of mandamus compelling the Inspector General of Police to investigate Oba Adeyemi for alleged criminalities, including murder, bomb planting and unlawful possession of arms.
The allegations are contained in a March 18, 2014 petition to Inspector General’s office.
The application for mandamus, with the suit No: FHC/IB/CS/54/2014, was filed at the Federal High Court, Ibadan by Abdur-Raheem on July 16, 2014.

Worried by the delayed investigation, the petitioners had also petitioned the International Criminal Court “in a bid to further press for justice” for which ICC has commenced its due diligence.
They claimed that Oba Adeyemi is not too big to be subjected to investigation as nobody is above the law.

The petitioners alleged that murders were carried out by the Tobalase group, allegedly founded by Oba Adeyemi, in which one of the group members, Mojeed Agbaje, had made confessional statement.
Agbaje had deposed to an affidavit at the High Court of Oyo State, sitting in Ibadan, “confirming the contents of the video CD”, which contains various activities carried out on instruction of the Oyo Monarch.

“Your Excellency, our hope lies in the present wind of change and your personal incorruptible and fearless manner to ensure justice irrespective of who is involved,” the petitioners pleaded.
The News Agency of Nigeria reports that recently some people have been disturbing the peace in Oyo town with the Police authorities claiming it had arrested some of them and investigating the matter.
NAN.