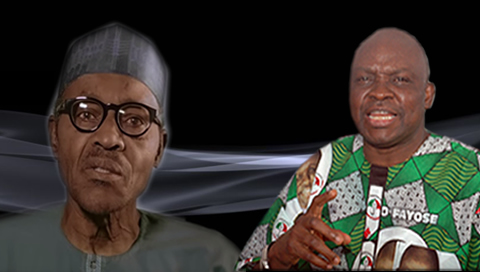 TVC E. The Ekiti State Governor Ayo Fayose have accused Buhari of being “online president” and that the president with his party deceived Nigerians.

The Governor of the Ekiti state, also accused President Muhammadu Buhari and his ruling All Progressives Congress (APC) of duping Nigerians.

Ayo Fayose claims Buhari received votes by trick, saying that Buhari denied everything he promised to the nation. “Everything Buhari and his party promised Nigerians when they were looking for votes, they have denied and it won’t be a surprise if one day, Buhari comes out to even deny that he was elected on the platform of APC.”

“There is a document that they disowned in August, last year which contains everything they promised Nigerians and if today, President Buhari chose faraway Qatar to announce that he won’t pay the N5, 000 promised unemployed youths and Lai Mohammed is here in Nigeria saying no job was promised, no one should be surprised.”

“Rather, Nigerians can only begin to pray that God, who rescued Daniel from den of lions will rescue us from this Buhari/APC one chance bus that we have entered,” he said. In September 2015, Garba Shehu, kicked off the campaign of distancing the APC and Buhari from two of the key campaign documents that apparently swayed a lot of votes for the president and his party. President Buhari has so far implemented only one of his promises given to Nigerians during the elections.”

The governor speaking via his spokesperson, Lere Olayinka, said: “They have not fulfilled any of the promises they made to Nigerians. In fact, they have even told us that they never made any promise. It is close to one year that Buhari assumed office; no single job has been created. Instead of the three million jobs per year that they promised, what we have been witnessing is job losses, economic hardship and budget padding.”

Fayose noted that it was more troublesome that the leader of the nation always choose foreign lands to make vital policy pronouncements, asking whether Buhari has turned himself to Nigeria’s diaspora or online president. He said: “Even though I am a lover of Muslims, I relate with them as I do with Christians in the State and across the country, but Nigeria must remain secular and a free nation where its citizens proclaim the name of Jesus Christ and Allah (Subhanahu Wa Ta’ala) freely.”

”The leader of the nation alongside with his vice Yemi Osinbajo declared their wealth. However, just recently the president disowned another campaign promise of paying N5k to unemployed youth.”

Ayo Fayose, has maintained that as the longest-serving governor in this country Nigeria, he remains a force to reckon with.