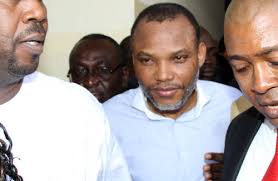 TVC E, NEWS – The leader of the Indigenous People of Biafra and Radio Biafra boss, Nnamdi Kanu, has finally been arraigned  before a new judge, Justice James Tsoho of the federal high court in Abuja.

Kanu, pleaded not guilty to the six count charge preferred against him.

After taking the charges, his counsel, Chuks Muomah SAN, applied that he should be transferred and remanded in prison custody.

Muomah added that the Department of State Security Service, cannot be the complainant and also hold his client at the same time.

He also emphasised that the accused person has been in the custody of the SSS for the past three months without access to his lawyers and family.

Counsel for the prosecution, Mohammed Diri, however opposed  the application for transfer on the grounds that it was the duty of the prosecution to produce accused persons on days of hearings.

He added that the SSS has never failed to produce accused persons, but the prison officials, usually have cases of not coming to court on grounds of logistics.

In his ruling, Justice James Tsoho, ordered that Kanu be remanded in Kuje prison, pending the trial.

The case has been adjourned to Monday the  25th, for hearing of the bail application.